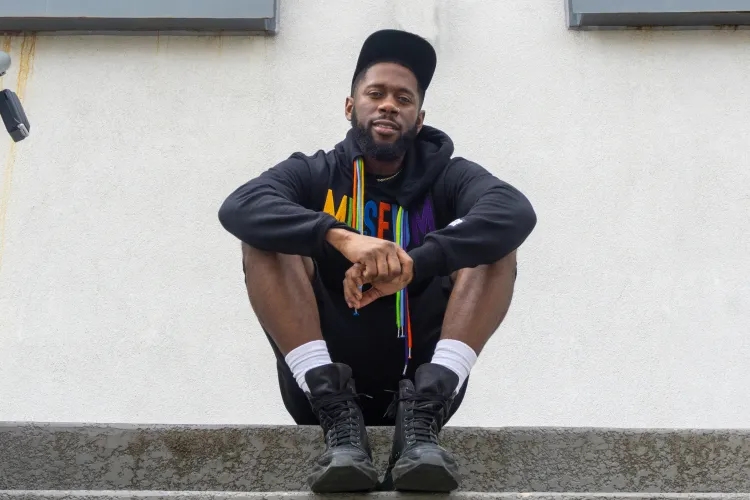 First seen in The Des.

When Dontrell Britton returned from federal prison to his mother’s DC apartment in 2017, he didn’t have tens of thousands of Instagram followers or over 400 thousand TikTok followers on his team like he does now.

After spending his entire early twenties behind bars and growing up rough in DC’s low income housing projects, he faced the daunting task of reentering society with few resources to help him, the label felon following him around and an ankle monitor tracking his every move.

But within a few years, Britton, who goes by “Trell the Trainer,” built a fitness brand that gained notoriety in the district as a workout program based on training he did in prison. He gained celebrity clients, Shy Glizzy and Pusha T, his training business boomed, and local outlets flocked to cover the success story of an ex-felon turned celebrity trainer.

Britton is one of an estimated 24 million Americans with a felony, but unlike him most of his peers don’t make it after returning home from prison. Nearly half of the people released in 2012, returned to prison within five years due to a parole or probation violation or a new sentence, according to the Bureau of Justice Statistics. And as a whole this group of people face staggering rates of homelessness and unemployment compared to the general population.

Since returning home and starting two businesses, Britton has made it his mission to fight the stigma of “felon” by telling his story and help other returning citizens by employing them first in his personal training business and most recently through his vegan food truck.

Britton spent his childhood moving around different low income apartments with his mother – one bedroom units packed with up to seven family members. His father was absent while he was growing up and was shot and killed when Britton was 16. Britton and his friends looked up to the older men around the neighborhood with nice cars, shoes and flocks of women. The streets and selling drugs were the default option.

He got tangled up with law enforcement early in his teens for the common charges that plague DC’s youth: auto theft, armed robbery and illegal gun possession. He spent his young adult life cycling in and out of juvenile detention, spending more time behind bars than at a school desk.

“I think I was just too caught up in being the toughest or the coolest. And I thought that was getting in trouble carrying guns, selling drugs [and] getting all the girls. So I just embodied that whole entire lifestyle.”Dontrell Britton

“All of us graduated to prison,” Britton said. Every time he was arrested, he returned to a juvenile detention center full of familiar faces of friends, young kids like him trapped in the same cycle from the same low income neighborhoods.

He told his mother that his goal in life was to be “a big drug dealer.” Older mentors tried to reach Britton, but he didn’t hear them.

“I think I was just too caught up in being the toughest or the coolest. And I thought that was getting in trouble carrying guns, selling drugs [and] getting all the girls. So I just embodied that whole entire lifestyle,” Britton said.

But at 19-years-old that lifestyle came to an end. The FBI raided Britton’s home as part of a monthslong investigation into a network of over 15 people distributing drugs including heroin and crack cocaine. This time it wasn’t a short few month juvenile sentence. He was staring down federal time as an adult. His mother was put in cuffs when their home was raided, and a few months after the raid his grandmother died of a heart attack.

Britton was sent to DC jail to await his trial, facing charges that could land him up to 10 years in prison. And DC jail was not juvenile detention. Fights in the jail meant people were stabbed and even killed, and the mental stress of seeing violence everyday wore him down. As Britton sat awaiting court dates, the gravity of his mother’s arrest and grandmother’s death sank in.

“It’s not just affecting me, it’s affecting everybody around me,” Britton said he realized. The stress of waiting trial, the environment of the jail and realizing the impacts of his actions pushed Britton to start working out. Britton and other people in the jail would sneak pull ups on the stairs when correction officers weren’t looking. He began hoarding Men’s Health magazines.

“That book was like my Bible. I don’t know what it was about it, but it was teaching me hygiene, how to floss, how to do a proper push up,” Britton said. Everyone in jail knew to read the magazines before they permanently disappeared into the stack he kept in his cell. Britton adjusted to jail as the months wore on, and working out helped keep his mind preoccupied.

By the time Britton was sentenced and transferred to prison, his training was paying off. He’d gotten “swole.” Within two months, over twenty other inmates began meeting Britton and his friend to train in the yard every afternoon. He was the rookie on the compound, but the most in shape in his unit. But he didn’t consider training as a career until an older friend in prison mentioned it to him. He looked into the average salary and decided to study for the certification as his release date loomed.

“You’d be surprised, people genuinely do want to do good and change. Sometimes lack of finances or environment is the downfall for a lot of returning citizens,” Britton said.

When Britton returned from prison to his mothers one bedroom apartment in 2017, he was 24-years-old and the biggest bullet point on his resume was felon. The bartending job he landed didn’t last long after his parole officer insisted on checking up on him at work. “Everybody knew I was a felon and I was like the oddball out of the group,” Britton said.

Britton’s ankle monitor would flag him for a violation if he left home. So when he quit his job, he started training in his apartment complex’s laundry room. He began with some Instagram pictures of his abs and then before and after photos of his first clients. Business quickly picked up as he took any clients that came his way.

But as his business grew, he still struggled with finding housing and with his parole officers.

“Not that they have bad intentions, but they definitely didn’t have good intentions,” Britton said. When he finally found an apartment that allowed him to rent despite his felony, his parole officer’s home visit caused his landlords to ask anxiously if they were police visiting him.

“You’d be surprised, people genuinely do want to do good and change. Sometimes lack of finances or environment is the downfall for a lot of returning citizens,” Britton said.

Most people return home from prison with little financial support, a record that prevents them from getting jobs and housing, and the ever-present option of slipping back to the quick money of the drug game.

A report on those released from prison in 2010 found that 33% of people found no job at all in four years post release and around two-thirds of the population were jobless at any given time, according to the Prison Policy Institute.

And the jobs people do find are bad. “Harsh parole conditions, a lack of social welfare programs, and a tough job market are forcing formerly incarcerated people — already a low-income, majority-minority demographic — into the least desirable jobs,” the report added.

Britton said he sees his peers return home and spend weeks looking for a job before returning to selling drugs in desperation often with the intention to just hold them over until they find work.

“But once you pick up that pack, that job is less desirable,” he said. “It takes a strong, strong personal mindset and support and it hasn’t been easy. I still battle with it to this day, and I’ve been out five plus years.”

During Britton’s reentry process he took programs like anger management that he said helped, but did not address his reality. “At the end of the day, I’m a 24-year-old man returning to society. I need money,” he said.

“They want a 16-year-old to not sell drugs. They want a person coming home from prison to get a job. You gotta give me an alternative, if you want me to stop selling drugs, like you need to be putting some money in my pocket, and not having me just go to these free classes,” Britton said.

Training celebrities was life changing for Britton not only because it built his training brand, but it put a light on what he said he was really trying to do: talk about reform and inspire people with his story. He became his best proof that it was possible to spend most of your life behind bars, wrapped up in selling drugs, and still make it out with your life, freedom and even your own businesses.

Because of the stigma of being a felon and difficulty he experienced growing up and when he re-entered society after prison, Britton has made it his mission to create jobs for at-risk youth and people with records.

“With the food truck and the training, you’re getting paid so you have a legit job. And the environment that I create, it’s fun and it’s welcoming,” Britton said. It may not be life changing, but it is a start, he added.

His most recent effort, the Glizzys Vegan Food Company, started with his friend Nathan Headspeth, has been serving plant based food in district style for almost a year.

Whether someone working is making a plant-based hot dog or street corn, Britton said that they know they aren’t the only felon there.

“We together, and the goal is to uplift and show people that we collectively aren’t our mistakes that we made,” he said.