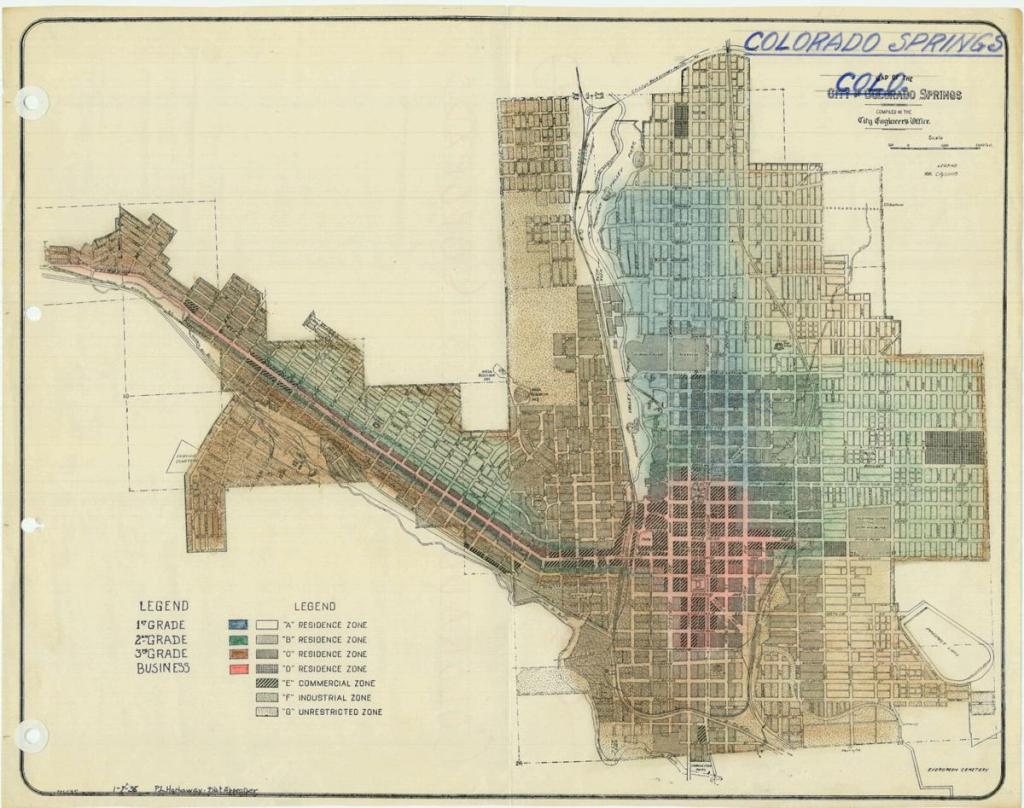 It was 1960 and Juanita Stroud Martin had just arrived back in Colorado Springs with four children and one on the way. After serving in the Navy and living in both Detroit and Philadelphia, she returned with her husband to her hometown to raise her family. Now divorced, she remembers her ex-husband’s fury when their real estate agent refused to show them a house on Prospect Lake.

“The real estate agent, who was a white woman, told us that if she even showed us those houses, she would lose her license,” Martin says.

The agent pushed them farther from the lake to Cucharras Street in the predominantly Black Hillside neighborhood, where they bought a home big enough for the whole family. But the agent’s refusal to sell them a home in a white neighborhood did not surprise Martin as much as her then-husband.

Martin grew up in Colorado Springs in the 1940s and, despite the existence of integrated schools and largely integrated neighborhoods, Martin was allowed to swim only once a week in the community pool and the water was changed before white people swam again. She remembers being told she couldn’t ride in elevators or eat at restaurants and, as a kid, was segregated to movie theater balconies where she’d throw popcorn on the white people in the seats below.

“You could do certain things, but other things weren’t allowed. And there were no signs like there were in the South. It’s just a tacit understanding that you could go here, you could do this and you couldn’t do that,” Martin says. The real estate agent’s discrimination fit with the Colorado Springs she knew.

“It made me angry because of the old adage: taxation without representation. … I expect [that] I pay taxes [so] everything should be open to me that’s open to anyone else. But no, I was not at all surprised,” Martin says.

Real estate loan and rental discrimination based on race, sex or national origin was outlawed years later by the 1968 Fair Housing Act. That included outlawing redlining — shading predominantly Black and Latino neighborhoods red on maps, indicating they are risky areas for banks to approve home loans.

The legacy of racist housing policies continues to impact cities across the country, including Colorado Springs, and contributes to the ever-widening wealth gap between white and non-white families. According to a 2019 Census Bureau report, the median wealth of white households was $139,300 compared to $12,780 for Black households and $19,990 for Latino households. Owning a home heavily influences a family’s net worth — the report also found that across races, a homeowner’s median net worth is 80 times more than a renter’s.

When you talk to […] the people who have actually lived [housing discrimination], it’s not different. It’s very much the same story around the country. We just don’t know it or we’re not asking or we’re not hearing from the people that do know.

Redlining has had a lasting impact on Colorado Springs neighborhoods and on the wealth of Black families. Today, historically redlined neighborhoods in the city continue to do worse economically and are currently more at risk for housing instability and homelessness due to the impacts of COVID-19 than predominantly white neighborhoods that were rated “better” in the 1930s. And Black people continue to fall behind other racial groups when it comes to homeownership. In the second quarter of 2020, 76 percent of homeowners nationwide were white, 51.4 percent were Latino and 47 percent were Black, according to the Census Bureau.

In 1936, appraiser P.L. Hathaway created a draft map of Colorado Springs for the city engineer’s office. Hathaway gave the neighborhoods four grades, from A to D, following the practices of other appraisers across the country who marked neighborhoods as “best,” “still desirable,” “definitely declining” and “hazardous” as part of The Home Owners’ Loan Corporation program. The HOLC was started to mitigate the impacts of the Great Depression by providing federally backed mortgages to potential homeowners. But the maps created by the HOLC’s assessors followed explicitly racist criteria. They ranked predominantly Black, immigrant and Latino neighborhoods lower than white neighborhoods. Assessors colored these areas red or brown. Banks and insurance companies then continued to deny mortgages, loans and coverage or charged unfair rates in neighborhoods marked as “definitely declining” or “hazardous.”

The discriminatory practice now known as “redlining” stifled for decades to come the ability of potential homeowners to build wealth. Cities also denied services and infrastructure to those areas, favoring investment in the “better” and predominantly white areas.

In Denver, the historically Black neighborhood Five Points was rated hazardous by an assessor in 1938 despite being described as a “Negro Country Club” and “one of the best colored districts in the United States.” The appraiser wrote that the “heavy colored population” prevented the neighborhood from being bumped up to even the second worst rating of “definitely declining.”

In Pueblo, the appraiser justified redlined neighborhoods because they were home to “working people of lower classes,” “a liberal scattering of Negroes,” “foreign elements of the poorest classes,” “foreigners, chiefly Mexicans,” and “an inferior class of white people,” according to a 1934 city map.

Conejos was leveled in the early 2000s to make way for America the Beautiful Park, and Hillside is still undergoing revitalization. But Mill Street, wedged between the railroad tracks and Martin Drake Power Plant (set to be shuttered in 2023) continues to lack grocery stores, health care access, green spaces and educational resources.

Mill Street is one of the most at-risk neighborhoods in Colorado Springs for housing instability and homelessness due to COVID-19, according to an August analysis by the Urban Institute, a nonpartisan social and economic research organization based in Washington, D.C. And while the Springs’ Southeast didn’t yet exist in 1936, it is currently at the highest risk for housing instability due to COVID-19, according to the analysis, which considered demographics, number of low-income renters and health care coverage. Ramirez says many people from redlined neighborhoods, including the former Conejos area, moved to the Southeast as the city grew.

“Those current conditions and modern-day inequities are intricately connected to those historical roots that we see on that map from 1936. They just sort of have been pushed out as our city continues to grow,” she says, adding the map designated predominantly white areas to receive more infrastructure and resources, like housing loans, parks, schools and even basics like plumbing.

All the while, the predominantly white families that received federally backed home loans were given a head start on building wealth for their families.

“They were able to build equity over decades or their lifetime and then passed it on to their children or another family member,” Ramirez says. “That generational wealth is what sort of survives.”

A 2018 study by the National Community Reinvestment Coalition, an organization focused on building wealth for underserved communities, found that three out of four neighborhoods that were historically redlined continue to struggle economically. And almost two-thirds of neighborhoods rated “hazardous” continue to be inhabited predominately by people of color. More than 90 percent of neighborhoods rated as “best” or “still desirable” are middle- and upper-income,  and 85 percent of those areas are still predominantly white.

The need to build generational wealth through homeownership is part of the reason Willie Breazell immediately purchased a house when he moved from Arizona to Colorado Springs in 1991. He’d retired from the Army and moved his family to the city to take a job with a military contractor.

Breazell made a point of telling his real estate agent that he wanted to see houses not just in predominantly Black neighborhoods. He bought a house in northern Colorado Springs. More than 10 years later, as the only Black student sitting in a real estate class, Breazell says the white teacher pointed to him and said redlining isn’t practiced against people “like him” anymore.

“I was kind of surprised that he made that statement,” says Breazell, who was a real estate agent from 2004 until this spring when COVID-19 kept him from renewing his license. He says the lack of access to home ownership is “part of the reason that many Black people remain in poverty.” Though housing discrimination is now illegal, it shows up in more subtle ways.

In January, the Indy wrote about an interracial couple who found a neighborhood covenant left over from 1941 stating that “no persons of any race other than the Caucasian race shall use or occupy any building or any lot” while buying a home west of Memorial Park. The covenant is illegal and null but still shocked them.

When selling a Black family’s house, Breazell says he told owners to remove their family photos so potentially biased buyers would not know their race. Breazell says that low-income families, including those who are Black and Latino, still struggle to qualify for home loans and often fall victim to predatory financing agreements.

Predatory lenders offer mortgages at such high interest rates that a homeowner has little chance of paying them off. After years of payments, they may be forced to let it fall into foreclosure without ever recouping their investment. In 2020, LendingTree, a mortgage company, found that Black homebuyers are denied mortgages 7 percent more than other applicants.

“A lot of Black people don’t understand redlining — the term ‘redline.’ All they know is they want a home and they are willing to accept almost anything,” Breazell says.

He says it’s common for homebuyers in Colorado Springs to pay $30,000 for a down payment and then $1,700 to $2,000 in a mortgage payment that same month. Without accumulated generational wealth, that puts homeownership out of reach for many.

Development in Colorado Springs has focused on both Hillside and Mill Street. Mill Street is the new home of the U.S. Olympic & Paralympic Museum and Hall of Fame, and a stadium for the Switchbacks FC soccer club, which will open in 2021.

Ramirez says that Colorado Springs is “agnostic” to the history of redlining, as “if it didn’t happen here.” She highlighted the importance of this history as the city gets swept up in new development. “When you talk to […] the people who have actually lived it, it’s not different. It’s very much the same story around the country. We just don’t know it or we’re not asking or we’re not hearing from the people who do know,” she says.

“When we don’t know [history],” Ramirez says, “we’re sort of bound to repeat it again and again.”