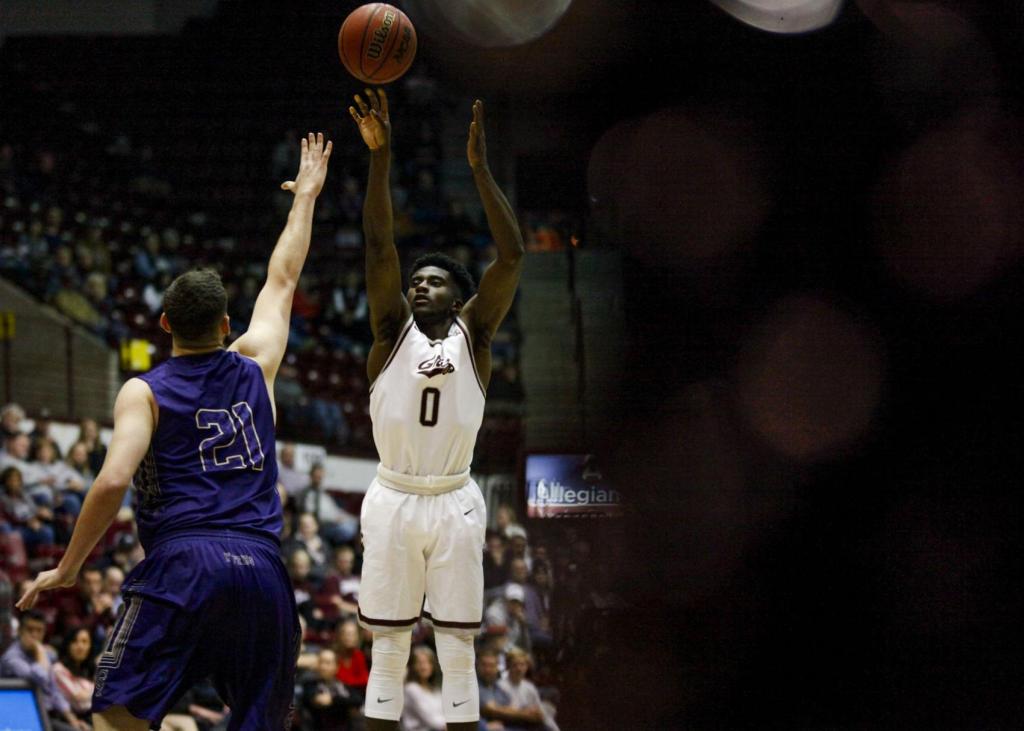 The men’s basketball players talk a lot about “Trav’s Rules.” When the team follows the rules, it usually pulls wins. Monday the team beat the College of Idaho 80-52.

Those rules might seem simple: communicate on defense, move the ball offensively, and stick to the plays.

But men’s basketball head coach, Travis DeCuire, said the Griz were gambling too much in the in the last games against Georgia Southern University (77-80) and Creighton University (72-98). Montana was not following the rules.

“We were just fouling way too much, so lack of patience and lack of discipline is really what caught up with us,” DeCuire said.

After the loss to Creighton, DeCuire promised the team hard practices to push the Grizzlies back into playing shape – and it worked.

“I think we’re back to playing together on both sides,” DeCuire said after the win against College of Idaho. In defense, anticipating ball movement and screens, DeCuire saw improvements. “We weren’t doing a good job of that, and tonight we did.”

The Griz are filling the hole left by Jamar Akoh, who has been absent due to a wrist injury, with new faces. Mack Anderson, a freshman forward, and Kelby Kramer, a redshirt freshman center, are attempting to fill Akoh’s absence in the paint. Kramer was a starter for the first time on Monday and played 22 minutes. DeCuire said he was happy with the younger players’ improvements, including Kramer’s reduction of fouls while defending the basket.

When Akoh is on the court, players taking risky shots have a bigger safety net from his height rebound abilities, DeCuire said. His absence has highlighted the risks Montana takes. When Akoh will return is unknown, but DeCuire said he is being evaluated and working on strengthening his wrist.

Sophomore guard Timmy Falls is back after a two-game absence that was not injury-related. “When you’re an emotional person, your emotions catch up with you, and so he needed some time to himself to get situated,” DeCuire said.

Falls said it was hard to watch the Creighton game from Missoula but the space gave him perspective, which he brought to the floor Monday.

“We just have to remember we shouldn’t care who makes the basket, everyone should get one. I think we are working on that way better than we were,” Falls said.

Ahmaad Rorie and junior guard Sayeed Pridgett both hit a team high of 17 points Monday night. Rorie made a team high of seven assists on Monday, reflecting the Griz’ efforts to move the ball better. At Creighton, Rorie only made 8 points in 25 minutes, four of which were free throws.

Pridgett scored 21 points in the first half against Creighton, and Michael Oguine, a senior guard, picked up the second half for the Griz with 21 points, but Montana still lost 98-72.

Bobby Moorehead, senior starting guard, returned to swooshing 3-pointers on Monday after struggling to get going this season, missing his first 13 attempts. The senior played a key role in the 17-18 season on defense, winning the team’s outstanding defensive player award. On offense, he ranked second for three-pointers made in the Big Sky Conference.

Montana will see how well it can minimize breakdowns and stick to “Trav’s Rules” when the team plays at UC Irvine on Dec. 8, defending a season record of 5-2. The Griz return home to play North Dakota State on Dec. 17.