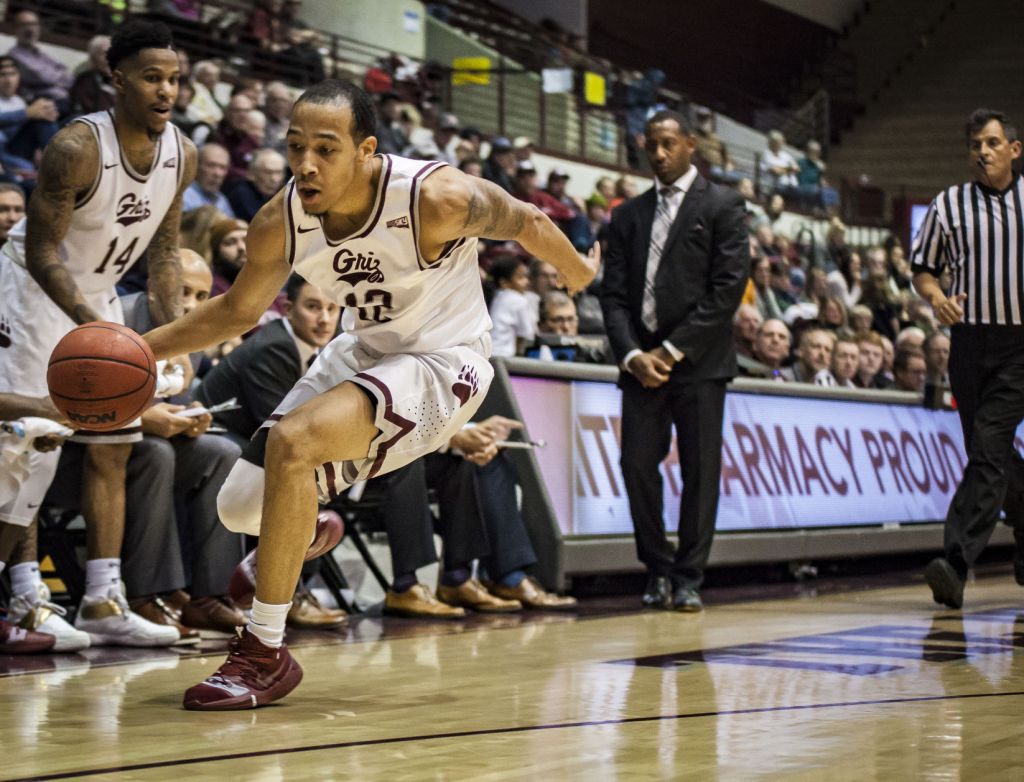 The Grizzlies jogged off the court at halftime with a 33-33 tie hovering over the team’s heads last Friday. The chances for a win against Friday night’s opponent, Georgia State University, looked grim. The Griz face high expectations this year after last season’s Big Sky Championship win and NCAA appearance. The season opening game against the GSU Panthers was no exception.

Last year, Montana faced Georgia State and lost. The Griz came out of the locker room after halftime to close a 17-point lead, only to lose by free throws in overtime.

The teams were placed next to each other in the NCAA tournament last year and have a high chance of facing each other again in a return to the tournament. Montana looked rattled for the first half of Friday night’s game, but came out of the locker room determined to fight for the win.

The Griz defense shut down the Panthers in the second half, allowing the Griz to creep slowly behind the Panthers score; not catching up, but not letting GSU runaway. The Griz struggled to shutdown Panther junior guard D’Marcus Simonds who hit 30 points for his team. Simonds is an NBA hopeful.

The Griz struggled to break through a zone defense that immobilized their offense. The teams were well matched, and rebounds turned into painful volleyball games as players tried to hit the ball to teammates from under the basket.

“It is hard, when you’re not making shots, to not be discouraged and keep doing the grunt work and the grind,” Travis DeCuire, fifth-year head coach said.

The Griz began to pull out of survival mode when Timmy Falls, a sophomore guard, sunk two 3-pointers in a row after the first six minutes of the second half. Falls proved once again that he is the Griz’s dynamite, but the Panthers responded with points of their own.

The Griz and Panthers played a cat-and-mouse game, with the score trailing each other by a few points for the first 15 minutes of the second half. Not even the bouncing curls of the dance team could alleviate the anxiety of the Dahlberg Arena fans.

After both teams hit a high number of fouls, they battled it out on the free-throw line.

Akoh held down the paint for the Griz, fighting through the Panthers’ zone defense to put up a team high of 22 points. A GSU guard slammed straight into Akoh in an attempt to deflect a pass Akoh was receiving. Akoh did not move as the Panther guard bounced off him. He was not amused, but despite the physical game Akoh pushed through his injured wrist.

Michael Oguine, senior forward, proved his consistency and willingness to put the pressure on in defense and engaged the entire team on the floor offensively. His ability to practically levitate toward both the basket and the ball gave him a team-high of 10 rebounds, which he followed with another team-high of four assists.

Rorie proved dangerous as point guard, using his teammates effectively. But when the offensive plays weren’t working, he drove to the basket himself. He drew fouls by making overzealous defenders trip over their own feet, which left him open for shots. He made the highest percentage of his free throws at .800.

“When adversity hits, you gotta to stick to the script,” Rorie said.

DeCuire called the match a “chess game,” trying to pair defenders to the Panthers’ highest shooters.

“You have to find ways to win when the ball is not going through the basket,” DeCuire said.

The Griz pulled out a seven-point win against GSU (81-74). DeCuire attributes that win to Montana’s defense, which shut down over 60 percent of GSU’s field goal attempts.

“It was a grind defensively, I think it took our legs and that was why we were so poor from the free-throw line,” DeCuire said.

Kendal Manuel, a redshirt junior guard from Billings, made his debut appearance in a Griz uniform after being cleared to play last Friday. He transferred from Oregon State.

His two 3-pointers, the only 3-pointers the Griz scored in the first half, were critical for Montana’s success.

For DeCuire, enjoying the wins never lasts long. “We have to move on and get better. We have to get in shape,” DeCuire said after the game Friday.

Montana will be on the road Wednesday to play three days of back-to-back games in the Islands of the Bahamas Showcase starting Friday at 9 a.m.