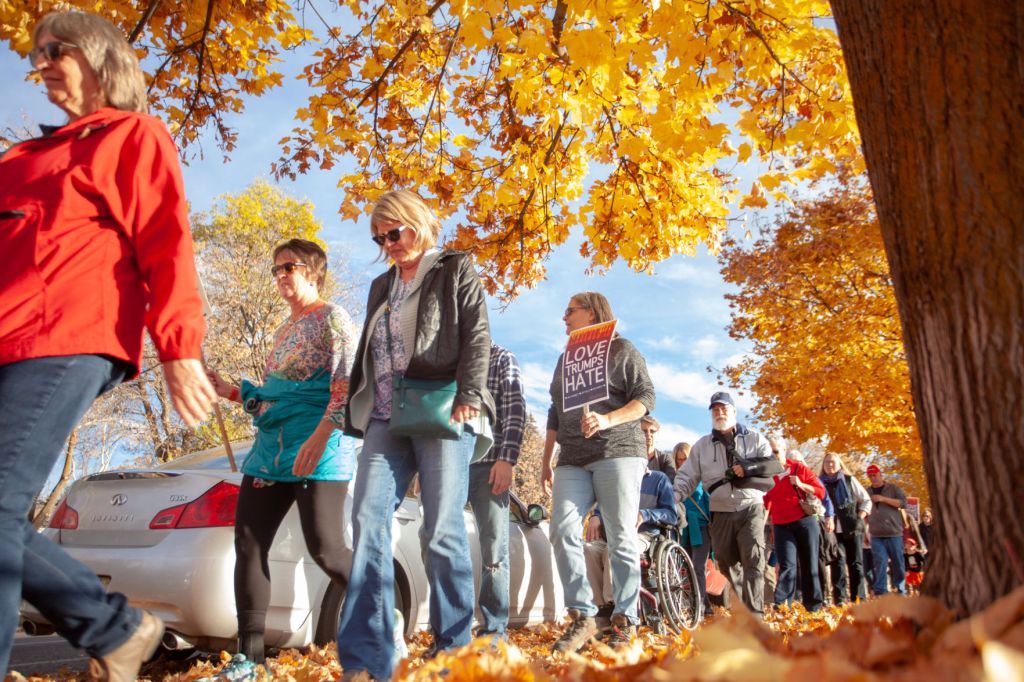 Hundreds of community members from all around Western Montana traveled to Missoula to demonstrate against President Donald Trump’s visit.

The ‘Love Trumps Hate’ protest was organized by a Sierra McMurray, a 22-year-old University of Montana student and local activism organization Missoula Rises.

Floating baby-Trump balloons, pink pussy hats, signs extolling Trump, “I voted” stickers, and painted and printed signs expressing support for marginalized groups scattered throughout the green fields of the park. The rally felt like a big celebration. There were drum circles, yoga, dancing, pozole and loud music before the speakers started.

The “Love Trumps Hate” rally sought to connect, rally, and march with the community to the polls, organizers said, while Trump supporters rallied in support of Montana Republicans at the Minuteman Aviation Hangar this Thursday. Busses took voters to the polls during the protest.

A little over a week ago, Sierra McMurry, a 22-year-old UM wildlife biology senior, created a Facebook event when she learned that Trump would be visiting Missoula for a campaign rally. The event grew larger than she expected. As a first-time organizer, she gladly accepted the help of local activist group Missoula Rises, which was created directly in response to Trump’s election.

“It was a way to show we are tired of the abusive and angry rhetoric and a way to protest for change and get people out and vote,” McMurry said. She wanted people to feel supported when voting and unite the community.

Three generations of women from the Blackfeet tribe, Kathy Little Leaf, 49, her daughter, Tabetha, 29, and her granddaughter, Nylah, 11 months, showed up at the rally because they have felt a sense of oppression from Trump’s administration due to his attempts to change treaty rights of sovereign Native American nations.

Kathy, a member of Indian People’s Action, came to the rally because “this is the presence that will embrace, support, acknowledge, and respect us, rather than Trump’s presence.”

Kathy held a sign that said, “We’re still here,” while her granddaughter played with a sign stating, “Hate never made a nation great”.

“We were able to hold space in our community to insulate ourselves from the hateful rhetoric of Trump,” Erickson said. The Rally culminated in a walk from the park to the Missoula Fairgrounds.

“You can march for the sake of marching, but there has to be some teeth behind it,” Erickson said. The Montana Democrats said they received at least 300 sign-ups for future volunteer shifts at field offices during the rally.

Derek Hitt, 35-year-old Missoula Carpenter Union organizer, said he came out to support Sen. Jon Tester and positive energy instead of the “hateful vinegar that is going on.”

“There is a rumor of the Democratic Party being this girl party. We are here to show that it is backed by real hard working men,” said Mark Carpenter, a 35-year-old union member.

Two Hellgate High School students, Sylvia Luceno and Marley Scolatti, spoke about the importance of young people taking political action before the march. More than 10 high school students from the Gay and Straight Alliance in Hamilton showed up to the rally because they thought it was a great way to participate in a safe place and get involved.

“Especially right now, students have to be engaged. These are extremely transformative times. If we just stagnate, Trump wins,” Glidden, the 18-year-old GSA vice president said.

Salish-Kootenai tribal member Arleen Adams opened the rally with a prayer song to the Creator with her family, a reminder that Missoula and the rally are on land that is originally Native American land. Mayor John Engen spoke about the greatness of Missoula. Community religious leaders, a veteran, and union leaders participated in the rally.

The Missoula Police Department was present with multiple officers on foot and patrol cars stationed around the march route. They were there to “keep the peace,” Sgt. Greg Amundsen said. Another patrol officer said every cop in the department was on duty for Trump’s Missoula visit.

Other actions included Missoula’s hills being turned into signs that said “Impeach”, “FU TRMP”, “LIAR”, and “Dump Trump”. Over twenty protesters showed up to Trump’s rally with signs to confront rally goers and played YG’s song “FDT,” in which he raps “Fuck Donald Trump” repetitively. UM faculty held a “teach-in” on the University campus today.

The Missoula Rises event brought many different groups together to create a community of support. Erickson said she hopes the relationships built at the rally will help create grassroots activism beyond just the November election.